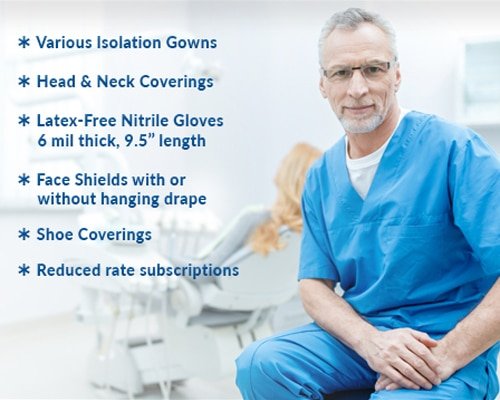 Please select the size and quantity for a product and then click the “ADD TO CART” button to add the item to your cart. Repeat this process for each item on the page you wish to purchase.

WARNING: We encourage dentists to utilize the level of protective that is required by OSHA standards for mercury. Isolation gowns have not yet been rated for use against mercury vapor and particulate matter. But we understand that not all dentists want to wear full body hazmat suits rated for mercury. With that in mind we offer Polyethylene-Coated Isolation Gowns as preliminary testing has shown that it’s more protective of mercury than breathable single layer isolation gowns. These isolation gowns are ONE TIME USE ONLY as they will become contaminated with mercury during removal of an amalgam filling, so please dispose of according to local, state and federal regulations.

You will have to purchase hoods and feet separately, taking into careful consideration to leave no uncovered skin.

Mercury can be absorbed through the skin, so please take careful consideration of the following items. Even with all engineering controls the removal of a mercury dental filling will release mercury contaminated particulate matter which can stay airborne for up to 10 minutes, eventually landing on surfaces and flooring. Implementing head coverings that also covers the neck area will protect skin from mercury exposure.

Protection of clothing is important as well, so that mercury particulate will not land on your clothes (pants, shoes, etc…).

Studies have shown that even with engineering controls such as water and high volume suction, that the removal of mercury dental fillings generates mercury contaminated particulate matter. Some of these particles will bypass suction controls and be deposited on the face and neck of the dentist and assistant, where it will continue to off gas or be absorbed into the skin, thus exposing dental professionals after their respirators have been removed.

Face shields are a vital component to preventing mercury particulate from landing on the face and neck of dental professionals. Likewise, safety glasses will protect your eyes. Face shields with hanging drapes will provide added protection from mercury particulate matter coming up from below the face shield. Face shields will be contaminated after each mercury filling removal and thus are one time use items, so please order a monthly amount equal to the number of amalgam removal sessions you perform each month. Any items present during an amalgam removal that will be reused should undergo thorough cleaning to remove mercury. 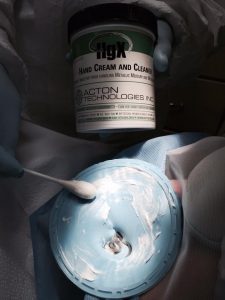 A dentists’ hands are at the source point of mercury exposure during the removal of an amalgam filling. Even with all engineering controls, large amounts of mercury have been measured on the gloves of dental staff after removal of an amalgam filling. OSHA designates a skin notation for mercury absorption, thus we offer thick nitrile gloves from 6 millimeters up to 8 millimeters with extended cuffs. Additionally, many dentists double glove and smear HgX Hand Cream on the first glove layer for extra protection.

AT SOURCE ORAL AEROSOL VACUUM
Each room where mercury fillings are removed must have adequate filtration in place which requires a high-volume air filtration system (such as an at source oral aerosol vacuum) capable of removing mercury vapor and amalgam particles generated during the removal of one or more mercury fillings.

Register with MyUS.com to obtain a USA address and have your packages shipped internationally, for low rates.